The Race Committee and sailors made the best of 3 days of unusually light winds from the S/SE dished up by SoCal’s June Gloom.  8 Races were sailed over the course of three days both inside the harbor and outside in the ocean.  Everyone was expecting solid Long Beach breeze and full ripping, but unfortunately, crouching was the norm and the Fleet never had a chance to leg out and enjoy the traditional summer breezes Long Beach is famous for.  They did, however get to enjoy the excellent swag from regatta sponsors Zhik, Sailing ProShop and Mapfre Insurance and free beer from sponsor Ballast Point Brewery.  Thank you to all of our sponsors and to ABYC for your support!

Day 1 was sailed in light Southerlies.  Two course races were sailed inside followed by 17 mile distance race that class rules state must be sailed for the event to count as a National Championship.  Race 1 was won by Brad Ruetenik and “Down Town” Garrett Brown (DTGB) after Joe Bersch/Leith Shenstone fouled them and capsized at the first leeward mark.  Race 2 was won by Steve Goodson/Alan Diercks showing great light air speed in spite of their deserved reputation as the boat to beat when the breeze is on.     In the distance race, Bersch/Shenstone got off to a good start and lead wire to wire, showing solid speed in the light winds and particularly the ocean lump and winning the distance race President’s Trophy.  Seattle sailors Kris ‘Hendo’ Henderson and Dan Kaseler played the day like a fine instrument and lead the day with finishes of 2,2,2.  ABYC hosted a fantastic, finger lickin’ good BBQ dinner and beverages flowed at the club following racing. Day 2 started with an onshore postponement of about 30 minutes.  The fleet arrived on the ocean course, (along with other fleets racing in the ABYC Olympic Classes Regatta) in 12-15 knots, hopeful of a good day of sailing the 4 scheduled races.   Unfortunately, before the first race of the day started it had already started dropping back and eventually settling in the low end of 6-8 knots and then dropped further from there.  Bersch/Shenstone took wins in Races 4 and 5 and were leading Race 6 with Ruetenik/Brown and Hendo/Kaseler close on their heels when it was abandoned.  Bersch/Shenstone, Ruetenik/Brown and Hendo/Kaseler (except for their unfortunate breakdown in Race 4) all showed good speed with their single spreader ICE masts and Glaser Sails.  The U.S.-built Henderson Boat Company B6’s proved to be a bit quicker in the sloppy chop.   At the end of day 2, Bersch/Shenstone’s 1, 1 put them in the overall lead a couple points ahead of Ruetenik/Brown and Henderson/Kaseler after a throwout.

Three races were sailed on Day 3 back on the inside course, starting again in light southerlies with the wind finally getting around to the right during Race 7 and building to a maximum of 8-10 knots for the final Race 8.  Skipper and crew alike welcomed the ability to finally stretch out on a semi-regular basis. Liking the flat water on the inside course, Ruetenik/Brown took the Race 6 win with Bersch/Shenstone a close second and Henderson/Kaseler keeping the heat on them both with a third.  Race 7 saw Bersch/Shenstone, whose worst race of the series was a 4th, attempt to drive Ruetenik/Brown back into the fleet, hoping to force them into keeping their Race 2 6th place finish as a keeper.  On the last tack to the finish, however, not only did they manage to surprise tack and break the cover, they also managed to put a boat between them crossing the line 5th to Bersch/Shenstone’s 7th.  Jacking up the pressure further, Henderson/Kaseler took the win followed across the line by Chris Rutz/Mikey “Polish” Radciejowski and Terry Gleeson/Evan Sjostedt.

Celebratory ales were shared ashore and congratulations exchanged amongst the competitors for the fantastic competition experienced on the water and the support and camaraderie given on shore.  Although the winds had been light all weekend, they were steady and the competition was incredibly close and tight.  The racing was mentally challenging and exhausting. 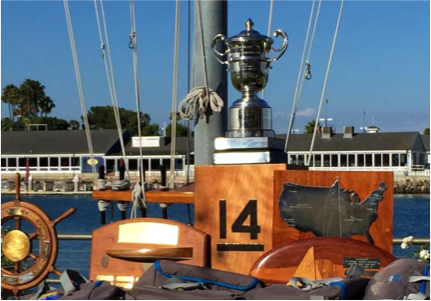 After most of the boats were disassembled and packed, the competitors gathered on the lawn for the awarding of the Fleet’s historic Trophies.  This is where it was first learned, much to the surprise of the competitors, that Rutz/Polish had been scored OCS in Race 7 along with Goodson/Diercks.  The effect of this was to put Ruetenik/Brown in a tie with Bersch/Shenstone on points that, when broken, resulted in Ruetenik/Brown becoming the 2016 National Champions.   Although a surprise, Ruetenik/Brown are deserving champions after they sailed a fantastic final day that demonstrated the advances the team has made through practice, hard work and the rig and sail development they have done with the help of Cameron Puckey and Jay and Pease Glaser of Glaser Sails.   The US Fleet has become incredibly competitive over the last few years with different boats winning regattas and any of the top 10 boats or so capable of winning races.   There was a protest filed and that was eventually denied but in the end Bersch/Shenstone and Reutinik/Brown proved to be light air masters, each with 3 bullets and the tie being broken on number of 2nd place finishes.   Well done and impressive job by both teams!

17 year old Aidan Mobley, sailing with class veteran Bryan Buffaloe finished 9th and was awarded the Avenger Trophy for being the most deserving boat over 10 years old and winning the “B” Fleet. Kris Bundy and Fritz Lanzinger won the Masters Trophy for the highest placing team (5th) with a combined age over 100.

Following the World Championships, the next big event in the U.S. will be a 2 day West Coast Championships in October out of St. Francis YC racing on the CityFront and then for some boats it will be back to ABYC for the Turkey Day regatta.  The US fleet is getting strong and the competition stronger and in 2018 we have I-14 World Championships coming to San Francisco Bay out of Richmond Yacht Club.  If you are interested in learning more about this exciting class, you can do so by visiting our I14USA Facebook page and our site at www.i14usa.org.   Fourteens are Forever!

Thanks to Steve Jost Photography and Yvonne Galvez for photos.  More photos at https://stevejost.smugmug.com/YachtsandYachting/2016-International-14/