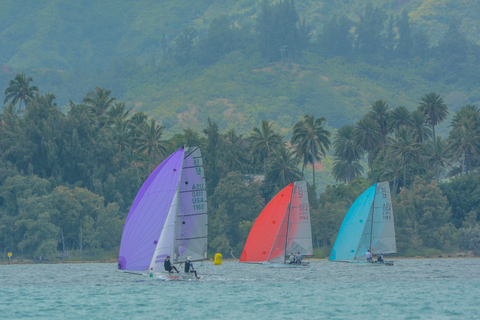 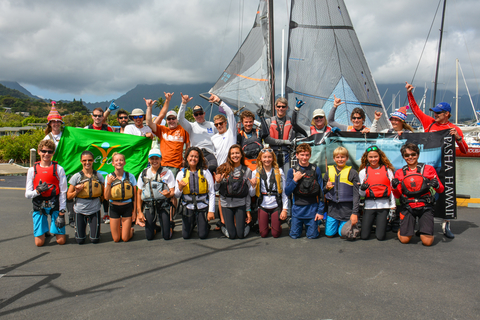 PASHA Hawaii 2016 I-14 Pac Rim sailors collaborate with our sponsors to host a youth sail training component. This year it was bigger than ever.  Pasha Hawaii arranged for two television spots with youth interviews on KITV news. The first one was a week before the event and was a live TV interview with Kaneohe YC youth sailors Kiana and Kahea Heitzman. The second interview took place at KYC during the sail training with participants. There was also a half-page article in MidWeek prior to the regatta. This statewide exposure of youth sailing, and sailboat racing in general made it possible for the public to come out and see the competition as well as join in the training event.  Our sponsor Pasha Hawaii and Laurie Lagrange’s efforts brought more interest to the sport of sailing.

The skiff training ashore and I-14 rides on the bay occurred on a beautiful Sunday morning. The wind was a steady 12 knots. Youth sailors from three Yacht Clubs across the island of Oahu participated.  Photographers took photos from the float boat as the young sailors switched in and out crewing with the racers aboard some of the newest I-14 boats competing in the world.

Clark Fremgen facilitated running the races over 3 days, in his usual flawless manner. This was his 7th time as Principal 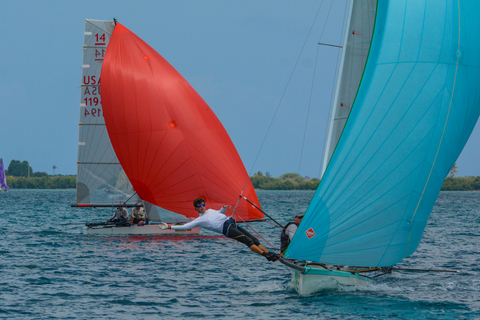 Race Officer (PRO) for the event.  His team of KYC volunteers did a tremendous job setting courses in a shifting breeze during the first two days of sailing. The racing started and finished as scheduled and all eight races were completed as planned. Volunteers included float boat drivers Mark Logan, Fuzz Foster, and Charlie Stone with KYC and visitor crews each day. Jenny Vickery from Australia and local boatman Rick Pelton supported “Clarky” on the RC boat.  Maureen Bates was the windward mark set boat with visitor, and former 14er Eric Arens. Thanks to the Judge team led by WYC sailor Joseph Shacat that included Michael Roth, Steve Thomas and Rich Macready.

Former World Champion Kris Bundy and his long time crew Fritz Lanzinger dominated this year’s competitive fleet of 21 boats with three firsts, three seconds, and two fourths. There were no throw out races in this event. Terry Gleeson and Evan Sjostedt placed second. Terry is the current USA I-14 President and with Evan the reigning National Champions. Long time 14ers Steve Goodson and Alan Diercks from Seattle were third, with only one point separating them from second place. They are the current North American champions. Joe Bercsh and Canadian Leith Shenstone were one point back in fourth place and Chris Rutz and Michael Radziejowski from the Bay Area placed fifth.  The racing was very close and one shift or dying breeze would change the results for places 2, 3, and 4. The racing at the top of this fleet was very close and competitive right up to the last run home in the last race. 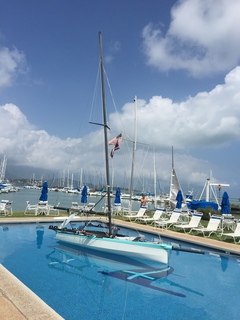 Inside the racing fleet three separate competitions were taking place at the same time. Nine boats competed for the I-14 ‘Classic” trophy which is for boats designed prior to 2003. All of the local Hawaii fleet fits that category. Stewart Vickery, from Australia, sailing with his daughter Freya won the event convincingly in a Bieker 3 design.  Dominic Van Essen from England and Simona Saccani from Italy finished second. Local youth sailor Lars Von Sydow, sailing with his father Harold finished third.

In the female division there were seven competitors. Freya Vickery won with Simona Saccani second and local KYC and UH sailor Maddy Kennedy third. The final division was determined by age.

There were six sailors over 60 years of age still competitively racing the I-14 (they may need their heads examined).  This is known as the  “Old Farts” division.  Long time I-14 sailor from Santa Barbara, CA, Ron Boehm with crew JV Gilmour won this division. Stewart Vickery was second and local sailor Andy Bates was third. Special note: Alan Laflin returned after retiring last year to sail with Paul Disario who started sailing I14’s in the early 1960’s.  They are both in their 70’s and finished all but one race!!!!

The awards banquet featured young fire dancers and Hula dancers from Palama Settlement’s youth program. These young performers did an amazing job of “safely” entertaining the crowd. The performers ranged in age from 4 to 15 years old.

This year’s entries from overseas competitors provided sufficient funds from charting local boats to support a full scholarship to the KYC Youth sailing program this summer. Mahalo to our competitors for their generosity.

An annual long distance race starting from the KYC bulkhead was held on the last day of the event with 16 boats.  The pursuit race starting sequence is based on the scores from the PAC RIM. It is not counted in the PAC RIM series. There is also an award for the fastest elapsed time for this race. The fleet started at 11:00AM, in a building 10-14 knot breeze from the north. 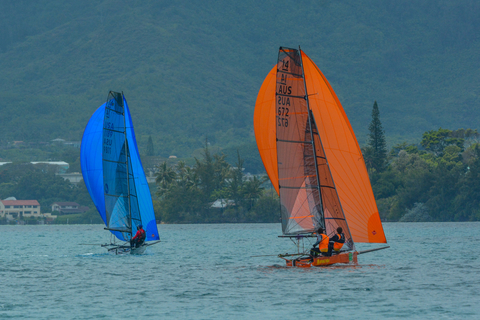 The course included club marks F, A, Coconut Island to port, F, Sampan Channel out to R2 to port, back through the Sampan gate and finish at the club line outside the harbor. The fleet got off without incident, the winners of the PAC RIM left the bulkhead at 11:26AM. Local sailors Tom Pochereva and Yovo Stefanov led for the first half of the race until they had a “swim” near R2.  Chris Rutz and Michael Radziejowski took the lead only to be passed half way down the channel leg by Steve Schumaker and Channing Hamlet who also capsized while jibing at the end of the channel. Rutz and Radziejowski regained the lead and held it the rest of the way back to the finish to win the race and finish 5th overall in elapsed time.  Goodson and Diercks were a close second finishing 2nd in elapsed time, and Ron (Old Fart) Boehm finished third sailing with JV Gilmour. Terry Gleeson sailing with Fritz Lanzinger were the fastest elapsed time sailing the entire course in 1hr:10 min:55 sec. Almost all of the fleet sailed the entire second half of the race from R2 to the Red and Green entrance marks with their kites up. It was a very fast and exciting race!

This was the ninth running of this unique sailing event that features youth advanced skiff training and environmental awareness. The entire KYC staff, caterers, club volunteers, youth from Palama Settlement, and sponsors made this the best PAC RIM ever. The Hawaii I-14 fleet “Thanks” all of you for being gracious, kind, and professional hosts in the Aloha spirit we cherish.