The 2015 I-14 US Nationals was held out of Santa Barbara Yacht Club on May 15-17.  This event was held in conjunction with the Santa Barbara Skiff Fest which this year included a fleet of 29ers, as well as the 505 class' Pacific Coast Championships.  Ten I-14s made the journey to SB, of these there were three Henderson built Bieker 6's, two Bieker 5's, a Canadian built Killing 3, the British built 'Hoff', which is sister ship to Pamela from the UK, the 'Shu 2' built of wood by Steve Shumaker, a Bieker 3 'Miss Match', as well as a Biker 2.  It was a light breeze event throughout most of the weekend.  Thursday a few boats were getting ready for some practice sailing when a rare, and much needed, So Cal. rain squall passed through sucking most of the breeze away with it making for very light air sailing later in the Friday saw a nice clearing breeze early in the AM and it looked like there would be good sailing with a building breeze, there were some forecasts which mentioned a possible 25kts. later in the day.  Most 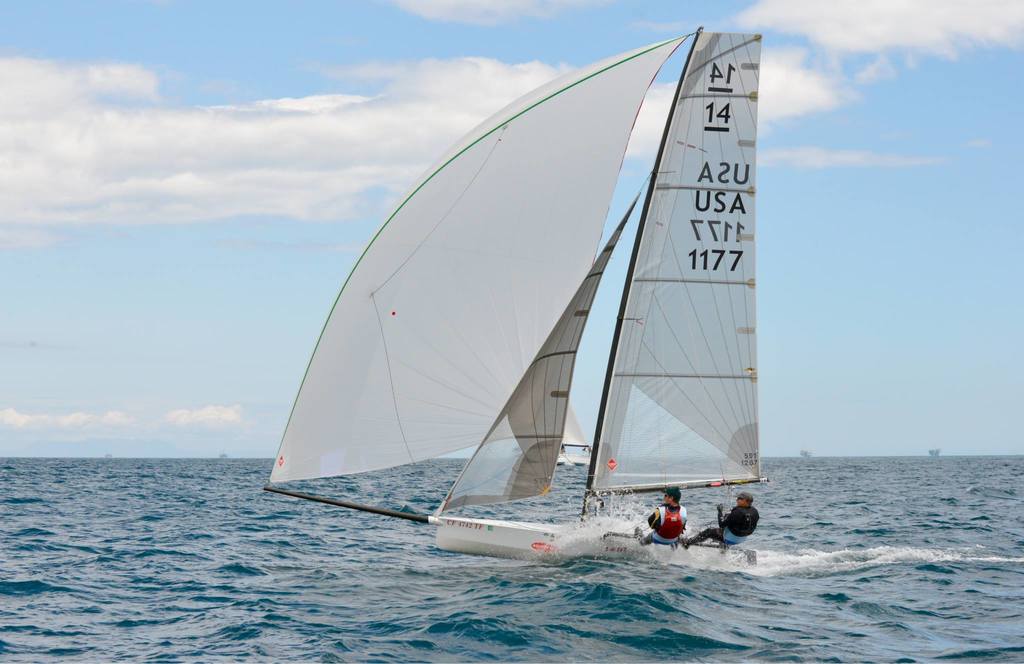 After sailing, the majority of the fleet retired to the local Bohem residence/compound above Santa Barbara for a wonderful Tri-Tip steak BBQ.  If you haven't ever sailed 14s in SB, you owe it to yourself to go if just for the hospitality long time 14er Ron Bohem and his wife Marlis and family provide.  They have a beautiful home in the hills above SB with incredible views and lots of locations for most of the fleet to be housed or camp.  Thank you Bohems for your incredible hospitality! 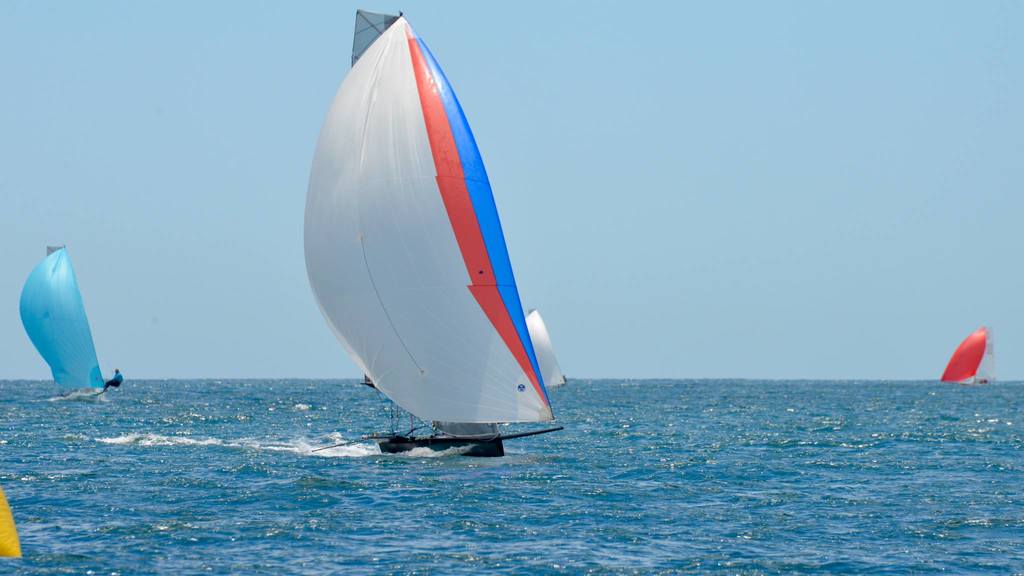 Day two was scheduled for the 'Long Distance Race'  The RC wanted to start us first to get us off the course to allow more room for the 29er and 505 fleets to sail on the windward / leeward courses.  We convinced them that they should run at least one short race prior to sending us on our 17 mi. race up the coast to Goleta and back.  This short windward/leeward race was started in a light breeze of about 8 kts. and was won by 1189 (Bundy/Lanzinger), 2nd was 1187 (Gleeson/Sjostedt), and third was the Canadian K3 CAN 616 (Laventure/Lemieux) sailed by the only female sailing in this years nationals Lauren Laventure.  Lauren is driving the newly elected International14 World Council President Jason Lemieux's boat, with Jason crewing.  Lauren has come into the fleet off the Canadian Olympic training squad of 49er FX sailing.  She is thoroughly enjoying the 14 fleet after competing at the recent Geelong Worlds in AUS.  Jason and Lauren left their boat on the west coast to do the spring and summer series from So. Cal. up to the Gorge later this summer.  After the initial race on Saturday, the fleet was sent on the traditional 'Long Distance Race' held at most of the larger US National events.  This is required to be at least 15 mi. in length and preserves some of the history and tradition of the 'Oldest International Dinghy class in the world'  We started in lighter breeze of 5-8 kts with a short windward mark in the east then set kites toward Goleta 8+ mi. down the coast to the west on Santa Barbara.  The top of the fleet split with a few boats going inside hoping for more breeze, the other portion of the fleet went outside with the hope there would be better and more stable pressure offshore.  It became difficult to assess the breeze offshore as there are numerous oil platforms offshore in these waters and there are often natural oil slicks which will flatten / glass off the water surface.  This was the case a few miles offshore and several miles long.  Bundy/Lanzinger and Laventure/Lemieux went inshore early along the coast, Gleeson/Sjostadt followed after being outside for the early part of the leg.  Ruetenik/Brown and most of the rest of the fleet stayed outside much longer.

As Brad Reutenik reported, "The breeze started to die off outside; we eventually gybed back in and had to take two boat's sterns that we had been hundreds of meters ahead of.  We were pointed directly at the inside boats which were at that time at least 1 1/2 mi. ahead.  As painful as it was, the boats that kept going further offshore were hurt even 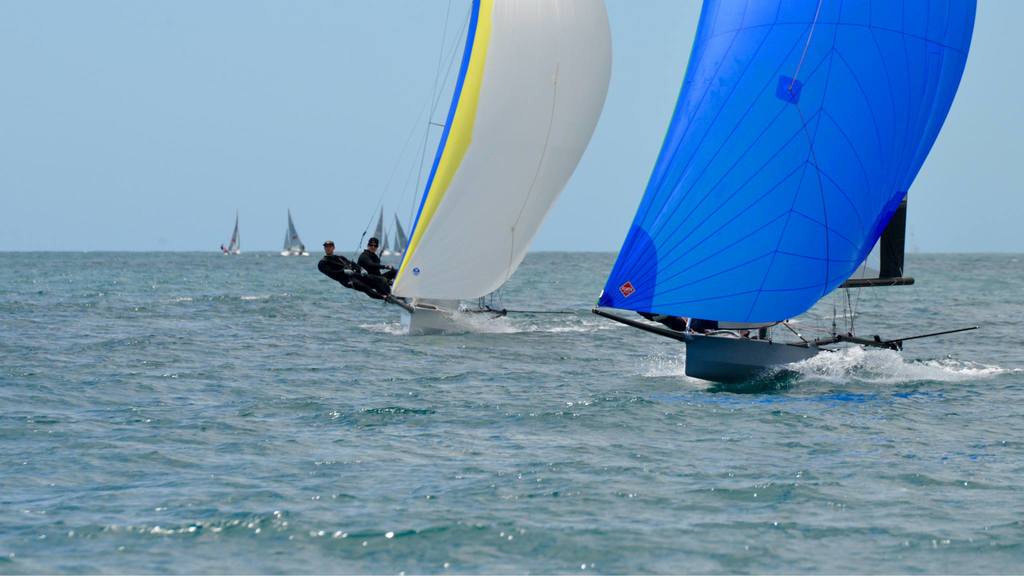 more.  The breeze lightened across the course and we were stuck with very slow sailing with occasional, up to, 1/2 wire conditions with crew to leeward, not comfortable skiff sailing!  We did get much closer to the lead group at the turning mark."  At the mark Bundy/Lanzinger rounded first followed by Laventure/Lamieux, Gleeson/Sjostedt, and then Ruetenik/Brown.  There was quite a gap to the next bunch of boats which included the GBR boat (Ried/Weis),USA 1183 the Shu2 (Shumaker/Bernal), and Henderson/Fabiansson in a tight group, followed by the B5 USA 1177 with locals Ron Boehm/Pete Mohler and the B3 USA 1176 (James Clarkson/Josh Leihe) who had been the last to gybe into shore.  On the sail back the top fours boats closed right back up in ever more decreasing breeze.  There was a near restart while sailing in 1-2 kts. of breeze against at least a 1 knot current.  At one point Ruetenik "watched the same beautiful cliffside home for 45 min. without moving forward".  Ried/Weis, Shumaker/Bernal and Henderson/Fabianson were caught inside in the dying breeze, and watched as Boehm/Mohler and Clarkson/Leihe came from 1 1/2 to 2 miles behind with a slight westerly that started to build, causing the second group to have a near restart as well.  We all got to set kites again and the lead group sailed in 1-2 kts. the remaining 3-4 miles to the finish which the committee shortened slightly by about 1/2 mi.  The top four boats finished after very light breeze and lots of kelp dragging.  Gleeson/Sjostedt just won over Bundy/Lanzinger and Laventure/Lemieux got back in front of Ruetenik/Brown.  The breeze completely died again for the remainder of the fleet, who were finished on the water by the RC and  towed back to the docks after a very long and slow afternoon.   SBYC threw a nice 'Beach Party' out on the sand which the club sits on beside the pacific ocean on Sat evening.

Sunday saw more very light breeze and fortunately an AP on shore for about an hour.  The fleet was sent out around 1300 to try to get an additional 3 races in, however the SIs did not allow for any races to start after 1530.  We went out and got two short light air races in, Sunday breeze was mostly 4-6 kts.  Going into the day Gleeson/Sjostedt lead with 9 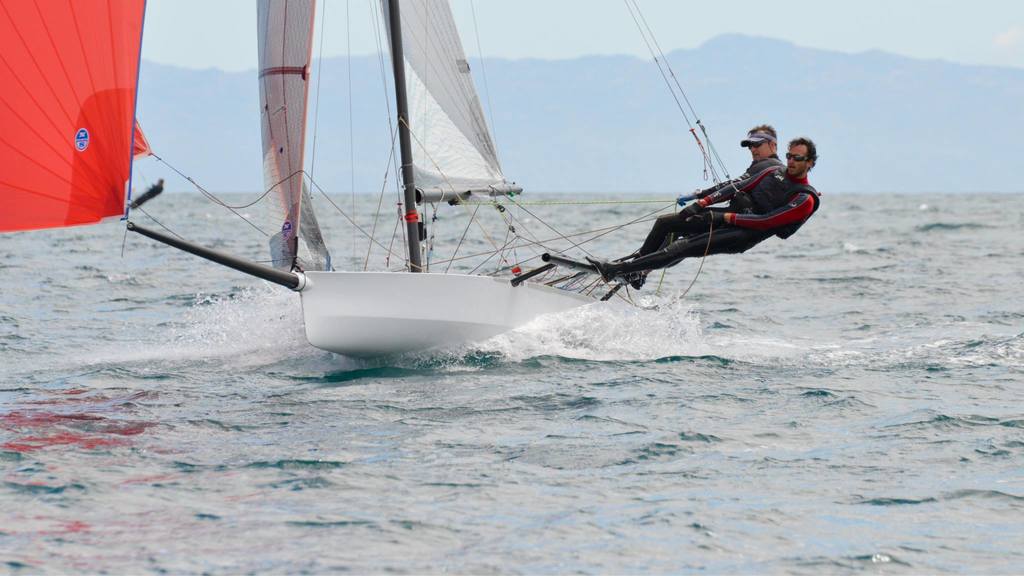 Congratulations to the new US International 14 National Champions - Terry Gleeson and Evan Sjostedt.  They have both worked long and hard, have a beautifully prepared boat with top equipment and have been sailing the boat a lot.  Both stated they learned a lot at the most recent World Championships in Geelong AUS in Jan 2015.  The next big event is the North Americans July 24-26 at 'The Gorge' in Cascade Locks OR.  We are expecting 10 Canadian boats plus the entire west coast 14 fleet. 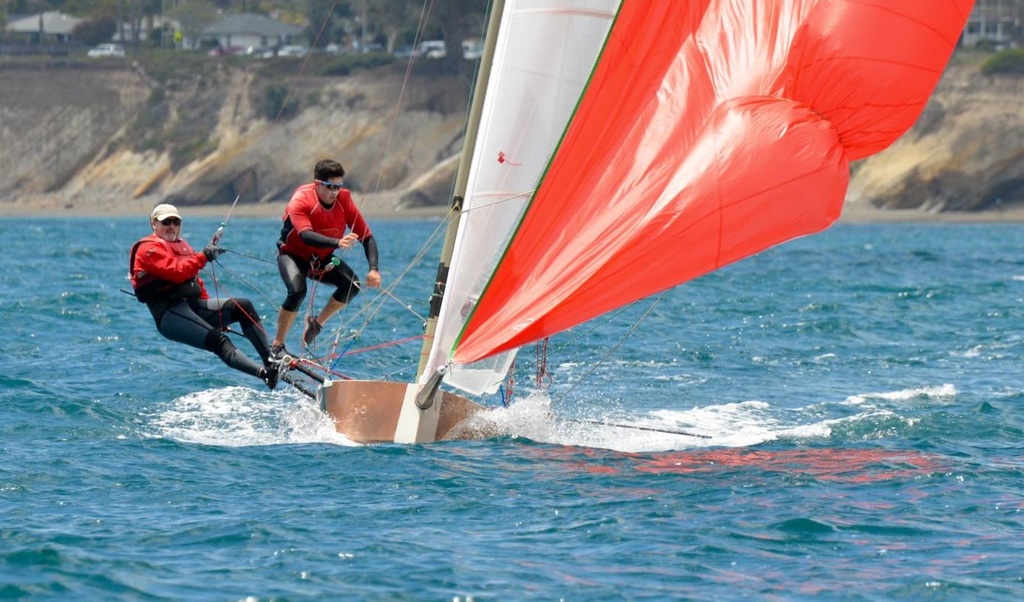 through in a long time,  Alex Bernal. He was national champion in 29ers as a youth out of SBYC and after finishing college and getting into the work force it was good to see him back.  Alex appreciated the boats and getting back into skiff sailing after high school and college sailing.  We hope to see more of his kind coming back to these incredibly fun boats.  There are some programs being worked on by the fleet to try to financially assist interested young teams in getting started in 14s.  Every National Champion that I can think of has been thorough at least 3-4 boats prior to winning their National Trophy.  Come join us!

All photos by Doug Stelck.

Thanks for posting this Steve.