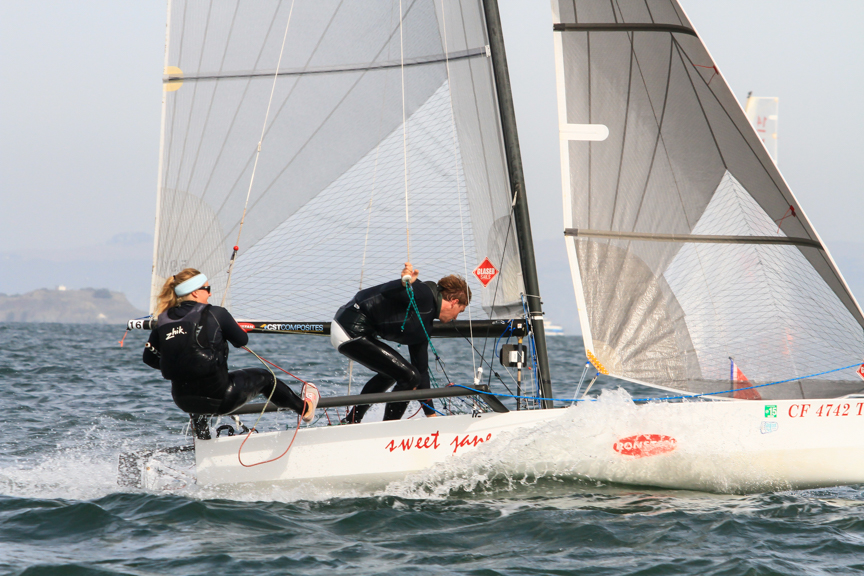 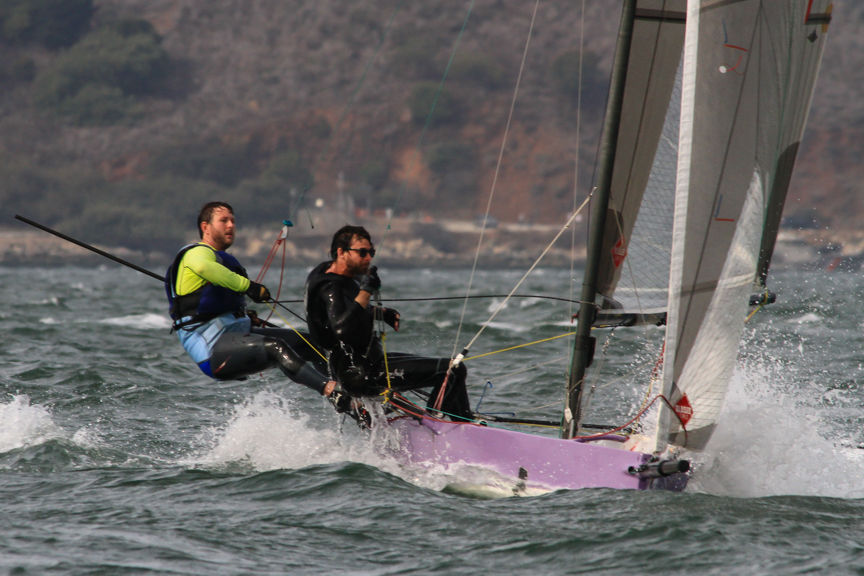 Seven 14’s came up and over to San Francisco’s yachting mecca, St. Francis YC, to race on one of the most iconic and difficult venues in the world, San Francisco Bay’s City Front.   The Fall Dinghy regatta, a two day event, was a big return for the I14 fleet would had not raced out of StFYC for more than 10 years.

St Francis was a great host on and off the water and we shared the course with 505’s, 29ers, 420’s and some one person dinghy’s.   The course was set up on a straight windward-leeward along the city, with the windward mark up in the typical corner and the leeward mark set between Alcatraz and the old waterfront warehouses.   A great course which unbelievably did not sail as one sided as some thought with the 4 knot ebbs running out on both days at 2- 2:30.    The breeze was a full mix with a 90 minute light wind postponement on day one and quickly ratcheting up to a few 20 knot gusts, but most of the breeze sat between comfortable double wiring to 15-16 knot breeze stepping up some sizeable chop for everyone to contend with.   Long courses were the standard for the 14 fleet and starts were pretty conservative with the big ebb tide until 85% of the fleet decided to port tack it making things interesting… it’s a good thing Kirk & Lazarro’s lone starboard boat is bright orange!

Great racing throughout that event by Brad Reutenik and long ago 14 sailor and local moth/skiff badass Johnny Goldsberry putting up a string of bullets.   They sailed fast throughout the event and took great advantage of the local shifts, currents, and who knows what else on this super scenic course.   Terry Gleeson and Evan Sjostedt had a difficult first day figuring out some boat issues and then chased Brad & Johnny around most of day 2.   18’ skiff local threat Patrick Whitmarsh sailed with Mikey Polish on Chris Rutz’ green B5, definitely led a few races and made things interesting while getting used to a 4’ smaller skiff.   The NorCal Skiff couple Katie Love & JV Gilmour celebrated their 6th anniversary together while racing Ron Boehm’s B5 to a 4th place finish… great to see you both on the water!   So good to see Kirk Twardowski out of the lead boats and back sailing with Mike Lazarro on the orange B6… and James Clarkson & Robin Kivlen were introduced to the big cityfront chop, current, and breeze and did their best to fight through a few breakdowns and were all smiles back at the bar.

Special thanks to 14 local legend Alan Laflin for helping us get sorted at his home club and finding some housing for a few.   Special thanks to Cameron Puckey (& Brad!) for driving 3 of the SoCal boats up and certainly sorry that Cam & crew Ryan Wynott only made it on the water for a short time before an issue took them to the bar cart early.   Hope to see you both on the water racing soon. 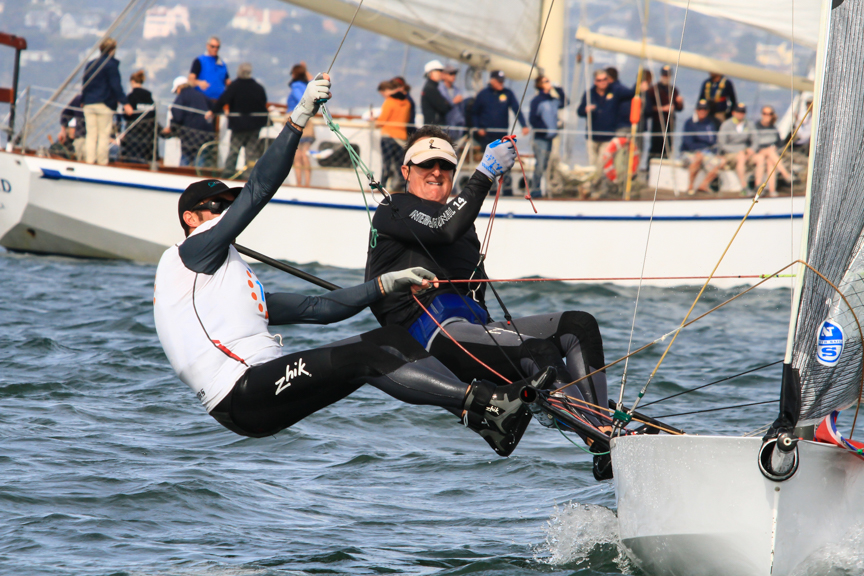 Great event and fun racing in another fantastic location for this year.   A large amount of those attending would like to come back, strong fleet visibility, but some issues to discuss with launching & retrieval (that’s a lot of late afternoon tacks!) but all in all a success and another strong option for future calendars.   Congrats again to Dr. Brad & Johnny G for showing everyone how its done!

Thank again St Francis YC, Alan Laflin, and thanks and credit to Chris Ray for all photos! (more at www.crayivp.com)

Next up… Turkey Day end of season showdown at ABYC!   On the line is the SoCal Season Championship and a BFT (big frozen turkey) – more to come