Twelve I-14 competitors, nearly all hailing from less breezy regions than the San Francisco Cityfront, faced three days of high winds against strong ebb tides, making just finishing a round a victory in the 2018 U.S. I-14 Nationals, held over Memorial Day Weekend, May 26-28, at St. Francis Yacht Club. Racing commenced Saturday morning with two windward-leeward and reaching legs, set northwest of Alcatraz Island. It quickly became clear that the fleet was widely diverse in terms of racing skill and comfort with the Bay’s waves and current, however even the slower boats managed to stay upright as the wind built steadily into the afternoon. Then the fleet set out on Race 3 – the distance race – a Bay tour of 16 nautical miles, including seven reaches across the central bay and back. Conditions got steadily tougher as the race progressed and, in the end, only three boats recorded finishes and each of them capsized at least once.

“The toughest day by far was the first day where we had two races on the north side of the Bay and then we did our class-required distance race,” said Gleeson, “The wind came up and the course was set for a number of very long reaches. Those can be very taxing on the crew, but we managed to hang on and won that race with only two other boats finishing behind us.” Gleeson and Barnes finished first, with a course time of 2:12, ultimately spending a total of six hours racing on the first day.

“That really taxed us for day two, but we kept pressing through it. My crew J.P. Barnes was hanging tough and did a fantastic job,” said Gleeson. On Sunday and Monday, the fleet opted for the more common windward/leeward format, so the course was set up along the Cityfront. A big breeze filled in by afternoon and, as with the previous day’s distance race, most of the competitors spent considerable time righting their boats and were thoroughly exhausted. After two races in winds building to the high teens and choppy waves kicked up by a strong ebb, racing ended early with no complaints as “AP over A” was hoisted on the signal boat and the fleet headed for the Club.

With similar conditions forecasted for Monday, racing started an hour earlier than originally planned to catch more flood tide and the lighter morning breeze. The plan worked and the fleet enjoyed three perfect windward/leeward two-lap races along the Cityfront. The combination of flat water, moderate winds and more experienced sailors saw these high-performance dinghies at their best: max hiking upwind and high-speed planing with very few mishaps on the downwind legs.

Gleeson agreed: “We did our best sailing on day three when it mattered most and just absolutely loved sailing on the Cityfront course in what turned out to be champagne conditions. It was a great competition and hospitality at StFYC couldn't get any better.” 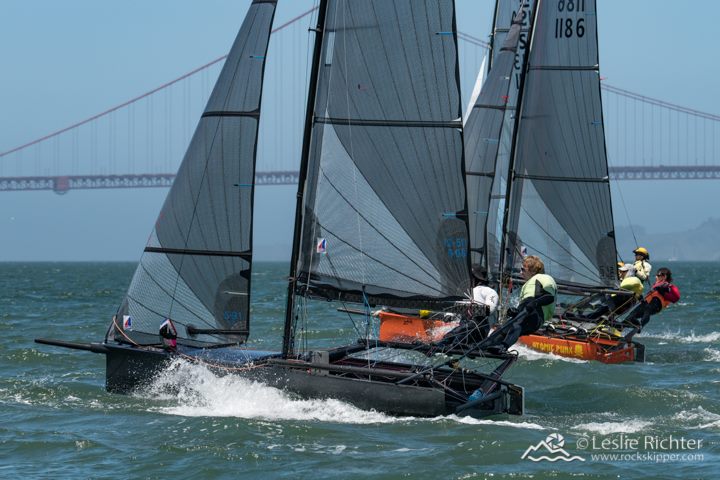 Several fleet trophies were awarded during a Monday afternoon ceremony, including the Laflin/Arens Trophy, named after StFYC’s Alan Laflin and awarded to the best finisher with the combined age of skipper and crew over 100 years old. This year it went to Rand Arnold and Gary Gremaux.

The First Female Skipper Trophy was awarded to Katie Love-Gilmour and Daniel Roberts, who also won the Best Finish with an Old Boat – the Avenger's Trophy.

Terry Gleeson and J.P. Barnes, as winners of the Long-Distance Race, took home the President's Trophy, as well as the Founders’ Trophy as the 2018 U.S. National Champion.