Another year, another Helly Hansen NOOD regatta in San Diego. And, like every year, this year was just as exciting with twists and turns throughout the three-day event March 16 – 18.

The Helly Hansen NOOD regatta is a significant I14 event for the U.S. fleet since it’s also the West Coast Championships. There were eight boats that competed in the event, with a mix from the NorCal and SoCal fleets. Unfortunately, due to an upcoming event, the PNW fleet could not make the trip down to San Diego to compete. They’ll be back next year for what should be an excellent showing.

The boats that lined up this year were:

USA 1200: Brad Ruetenik and James Moody sailing Brad’s brand new B6 (hull #14), Astragulu, all decked out with white interior and primer grey exterior. It’s a nice camouflage effect when on the water—dark on dark—that surely saves on weight and is simpler to deal with if you have to repair.

USA 1195: John Clark and Michael Lazzaro sailing John’s old B6 (hull #12), Forty, Too. The new B6 (USA 1199, hull #13) is undergoing some modifications so wasn’t available for the event, but it should be ready soon. 1195 is decked out in a “baby poo” color (olive green) to match his 1977 FJ40. You’ll understand if you see the two together. Otherwise, you might question the “brownish” color choice—it’s an acquired taste. The boat has just been switched over to a double spreader rig and is still being tuned. It’s about time John and Michael gave 1195 some love; 1199 seems to get most of the attention lately.

USA 1162: Mikey Radziejowski and Evan Sjostedt sailing their completely redone B5, Eris. This is Bieker’s former boat now owned by Chris Rutz. It looks stunning, like it was just popped out of the mold yesterday. They’ve put a ton of work into every aspect of the boat. It’s a sweet boat with an awesome teal color. And they’re both happy as clams with having the boat back on the water and in race-ready condition.

USA 1203: Terry Gleason and JP Barnes sailing the world championship Hollom 1(.5), Crumpedero. Terry took delivery of this boat at the end of last year as a temporary stopgap between his former B6 and his new Hollom 2 that is still being built. The boat was just retrofitted with his favorite CST rig, and it was time to ensure everything worked. No more PBO—he ran Dyform for this regatta with the move to carbon happening very soon.

USA 1177: Ron Boehm and Doug Mcghan sailing Ron’s B5, Lucky Dog. Ron had the boat delivered to the event without a crew or a complete set of sails. But he did have a brand new main, a kite, and the fleet helped him figure out a jib. Gary was in town on business from Canada and what better way to spend a business trip than to sail an I14 regatta. (Why aren’t all business trips like that?)

USA 1193: Channing Hamlet and Peter Stanton sailing Channing’s newly acquired bright red B6. This is their second or third regatta after obtaining the boat and they continue to work on refining the systems as they tune up for Worlds. It’s great to see 1193 on the water and a regular member of the SoCal fleet.

USA 117: Michael and Elisabeth Leitch sailing their recently purchased B2Z, Woody. They’re recent transplants from Canada to Los Angeles, and no 14er should be in SoCal without a 14. It was only a couple weeks back that they purchased Woody to be sure they have a boat to sail for the regattas leading up to and including Worlds. It’s awesome to have them as part of the fleet and sailing regularly.

USA 1176: James Clarkson and Josh Leihe sailing the purple B3, Miss Match. James is looking forward to his new Hollom 2 that is (perpetually) almost complete. In reality, it is almost complete, but aren’t all 14s? In the meantime, his current boat works well for getting him and Josh on the water. They had lost their foil blades on a previous sail so were using brand new blades and working through the kinks in the foil adjustment system to ensure everything works smoothly. You mean to say that things just don’t always work out of the box? If you saw the effort he’s put into planning the rigging on his new Hollom, things might just work out of the box.

Now, on to the regatta. Normally, San Diego is sunny, warm and very inviting. So what happened this time around where the temperatures were near freezing (for those in SoCal), with the mercury hovering near 60 degrees all weekend long. Anything less than 70 might as well be freezing. On top of that, it was cloudy with occasional rain. Very atypical for a SoCal event. But we suffered through the frigid conditions and enjoyed a nice regatta. Several 14ers are planning to file a complaint with the race organizers about the weather. No one in their right mind should have to sail in San Diego in less than 70-degree temperatures. What are we, Neanderthals? (Don’t answer that question.)

Friday was the first day of racing with three races. The conditions were light to moderate throughout the day, increasing a bit into the afternoon. Success was about switching modes, and whoever did that best made gains. For the first race, the race committee posted one of the longest temporary mark courses of the regatta—six legs. The race ended up taking nearly 1.5 hours. The second and third races were each posted as four-leg races to help get in more racing. 1200 opened up the regatta with a 1, 1, 3 to establish themselves in the lead and say to the rest of the fleet “welcome to my house.” 1162 had a solid first day with a 2, 2, 1, tying for the lead and putting themselves into an excellent position going into day two. 1203 rounded out the top three with a 3, 3, 2 and still very much in contention. Both 117 and 1177 couldn’t make it on the water that day (work and crew-related). 1176 had some issues with the foil adjustment spindle and had to go in for repairs. 1193 had some more significant damage that required carbon work. And 1195 had some on-the-water repairs needed to the jib halyard and foil control line. It was a fun day of racing and an exciting start to the regatta.

The top three standings after day one: 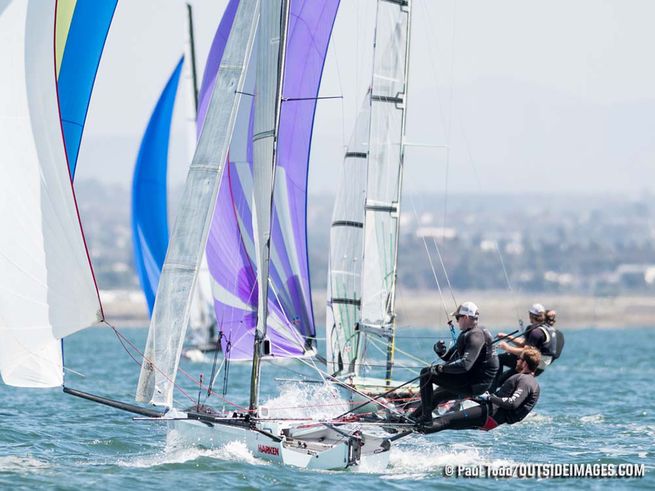 Saturday was expected to be the breeziest day of the three days as a storm had blown through the night before, dropping a bunch of rain, and was still lingering a bit throughout the day. Three races were expected, with two multi-lap sausage races followed by the long distance race. The long distance race has its own trophy, so it’s always a sought after and contested race. A full registration fleet was expected to be on the water, which made for more exciting racing and intra-race lead changes. However, 1203 seemed to forget to set their alarm clock, or maybe it was the late-night drinking competition with 1162 that resulted in 1203 not making it to the line for the first race (cannot blame the crew for his one). My suggestion is that when you reach your mid-40s, you should probably not compete in shots with mid-20-year-olds, unless you’re Russian or at least 2x the competitor’s weight. Nothing good ever comes from it, unless you’re in the younger group.

The first race saw tight racing between 1200 and 1162, with the rest of the boats following in pursuit. 1200 took the bullet to break the tie and establish a clear lead. The second race, with the lightest breeze of the day, saw the rags-to-riches get richer on each leg; 1195 seemed to have a personal puff the entire way and led around every mark, building on that lead until the final leg where 1200 kept clawing back. But there wasn’t enough runway and 1200 had to settle for a distant 2nd.

The third race was the most interesting of the day since it was the distance race. Usually, the distance race sailed is the longer 14 miler that heads up the San Diego harbor, under the Coronado Bridge, to a large buoy, and, after a few more marks, makes its way to the finish. The longer long-distance course is nearly always chosen by the race committee, even if it happens to be lighter breeze where it occasionally needs to be shortened during racing (as was the case last year). Since the first two races bled a bit late into the afternoon, the race committee posted the shorter long-distance race, which was only a seven miler. Given that this course is not often (or ever) sailed, the race committee was kind enough to call out the fixed marks and rounding directions during the pre-start using a bullhorn. Now the question was whether anyone actually knew where those marks were and paid attention to the rounding directions.

After racing concluded and everyone was back at the dock, there was a lot of discussion on who rounded the final mark in what direction, and what to do with the results. Only two boats had completed the course correctly—1195 and 1177. The decision was to stick to the basics of racing and all boats that did not round the course correctly withdrew. That gave 1195 its second bullet of the day, a win for the long-distance race, and bumped them into the top three.

The top three standings after day two were: 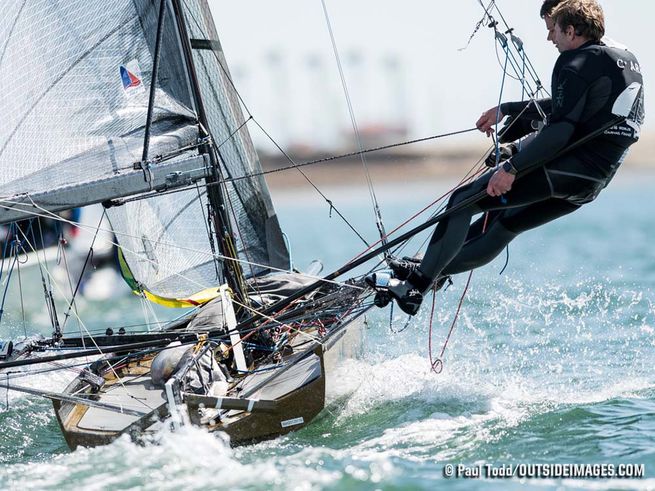 The final day of racing seemed as though it would be a light wind day. The fleet had asked the race committee to get two races off and then get us off the water early. The day of racing would be followed by packing up the boats, trailering them to Southwestern YC, and then spending 4.5 hours loading nine boats into a container to ship to Hawaii for the next regatta in April. The race committee obliged with two four-leg races.

The first race was a light wind race, making it challenging to find consistent pressure. This race saw 1193 climb up to a third place finish with some really good sailing, being very competitive with the top of the fleet, including having led at a couple of the marks. 1200 and 1203 crawled back up and passed 1193 about midway through the race and held on to take first and second for the race.

The final race saw the breeze start to pick up, which made it a bit disappointing that we needed to leave the race course after the race concluded to get to our next (not-so-fun) activity. The breeze continued to build throughout, making for a nice moderate-breeze race. Solid racing from all boats, with 1203 taking a convincing bullet, even requiring a circle after hitting the leeward mark, followed by 1200 and 1195. 1162 would have fared better, but saw a posting of six legs by the race committee at the warning, only to realize afterward that the race committee changed the course to four legs just before the four-minute mark. So they ended up doing an extra leg, just for kicks. But the breeze was solid, and I’m sure they had a ton more fun than the rest of the fleet who called it complete after four legs and then sailed in.

The final results for the regatta were: This regatta is a favorite for everyone, and there’s a ton of appreciation to Brad Ruetenik for helping make this event happen. He puts a lot of effort into ensuring that the I14 fleet is well represented at the event and the event organizers recognize the 14s as instrumental to the success of the regatta. Everyone is looking forward to next year when we expect to have an even better turnout with more fun and exciting sailing in San Diego.

Next up … Pacific Rim Championships in Kaneohe Bay, Hawaii, April 7-10.