This year the conditions proved to be different… same beautiful locale and clean water, but the breeze was on and delivering full Champagne conditions all weekend.   The practice day had some solid 15-18 knots for those that could make it and the forecast looked to be the same for the regatta weekend.   We had two SoCal boats that made it with Aidan Mobley and Pete Stanton sailing together and myself and JP Barnes on the B6.   From NorCal Katie Love was sailing the Green B5 with Joe Crum (welcome to the fleet Joe – we owe you some shots!), Matt Skafel was sailing with Kirk Twardowski on his Orange B6, and Mikey Polish and Evan Sjostedt were sailing Chris Rutz’s light green B5 with some new flash sails that Polish has been working on.   Representing the homefront was Ron Boehm on his B5 sailing with JV Gilmore.    Solid teams and everyone put on a great effort showing the 29ers and Vipers how its done.

Day one started with about 10 knots of breeze and quickly ramped up to 12 and finished the day with about 16+.    Gleeson/Barnes came out of the gates with some great downwind speed and took the first race with Polish & Evan not far behind.    Ron and JV were in the mix all event long and certainly won the Port tack start award – port tacking the fleet about 6 of the 7 races.    Ron and JV were always in front on the first leg with Polish and Evan right behind them with some really strong upwind speed.    Polish and Evan took the second race with Gleeson/Barnes taking the 3rd…    The day would finish with Polish and Evan then taking the 4th race – absolutely trading punches on day one with the two boats tied up at 6 points a piece for the day. Really impressed with the speed everyone was showing.   Katie and Joe had some phenomenal straight line boat speed and rolled us hard on one upwind leg.   I think Katie likes the new and improved ballast that Joe was providing – we hope to see them sailing together more.   JV & Ron hit the right side (shoreline) almost all weekend long and it proved a really smart move with most of the fleet falling in line (wish we learned that faster!).     Aiden and Pete were doing really well but had some rudder issues and may have been distracted by Aiden’s giant ‘packing’ logo on his kite – (Pete it has got to be tough staring at that all day).   Kirk and Matt are admittedly sorting out some general ‘new to sailing together’ issues, but the boat is fast and was in the mix all weekend and looking good as always.

Saturday night was awesome with Ron, Marliss, and the dogs delivering up a huge multi course feast with grilled tri-tip being served and the wine flowing.   Tired and hungry 14’ers had seconds and thirds and crashed soon afterwards only to wake up with Ron cooking everyone an awesome breakfast.   Thank your Ron for your generous and unwavering hospitality.  You are certainly a stalwart asset to the fleet and we salute you!

Sunday started with the breeze a bit lighter with single trap conditions quickly moving to double trap.     Sunshine and fairly warm water made it feel very much like our Carnac Worlds conditions and you can’t beat the scenery in Santa Barbara.   Beautiful.

It was Polish and Evan that struck first in the initial race on Sunday and by a large margin with Gleeson/Barnes working the left looking for it to fill in there first but to no avail.   Lessons learned Gleeson/Barnes worked the right on race 6 of the event and gybe set to get back to the shore.   This proved the right call and were able to take the gun tying the score back up to 9 points a piece with Polish & Evan edging Ron & JV out for 2nd. 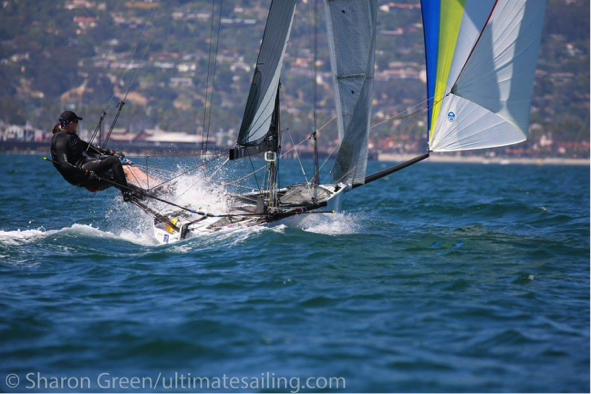 The final race and the battle is on – Everyone had pretty decent starts and the two top boats quickly tacked out to head to the shoreline and staying close together.    Gleeson/Barnes had the inside and were first to tack for layline with a solid lead built by height gained on Polish & Evan.   However, both boats were slightly overstood and Polish & Evan’s straightline boat speed quickly erased more than half that lead.   The boats stayed close on the downwind and rounded different sides of the gate right together.   A similar upwind battle for the third leg but with the boats closer together.   Gleeson/Barnes were the first to get the mark and gybe set out while Polish and Evan did a straight set and hit the outside.    Gleeson/Barnes had perhaps better breeze and more favorable waves, but that came with an extreme amount of 29er and Viper traffic.   What looked to be a considerable lead started to get erased quickly as Gleeson/Barnes did multiple luffs and gybes to get over and around the other boats.    They still had a slight lead as Polish/Evan crossed behind on port and then did their final gybe for the finish.   Gleeson/Barnes had one more gybe to make the finish but it was slightly downspeed due to the traffic.   They went for the boat end while Polish and JV came into the pin…   Gleeson/Barnes dove down to cross the line and could hear the gun go off as the Green boat edged them out for the win by less than half a boat length.     Congrats to Mikey and Evan for sailing really well and wining the regatta by just 1 point.   Even though it wasn’t our highest attended event this year, it was really solid racing and great camaraderie throughout the weekend.   If there is any question… Polish’s new sails are legit – give them a long look if you are in the market.

Santa Barbara Yacht Club held a solid awards event in their upstairs bar – and the Sharon Green Photo trophies were given to the top 3 with SBYC’s own Ron Boehm getting 3rd.    Excellent event and the conditions delivered.   This is an important and key event for us and about ½ way for all of the California boats – lets all plan on it next year and we’ll make it an even a better regatta.   See results below – Well done Mikey & Evan!

All Photos by Sharon Green