15 International 14’s came to Richmond Yacht Club for the biennial I-14 North American Championships.    Our Canadian friends to the North elected not to make the trip and focus their travel dollars for next years World Championships being held on the same Berkeley Circle race course in 2018 – which we certainly understand but they and their antics ;-) were certainly missed.    With the 15 skiffs that we did have the competition was very stacked with more than half the boats having at least one former National or major championship winner on board and a few former World Championship winning skipper and crews in the mix. 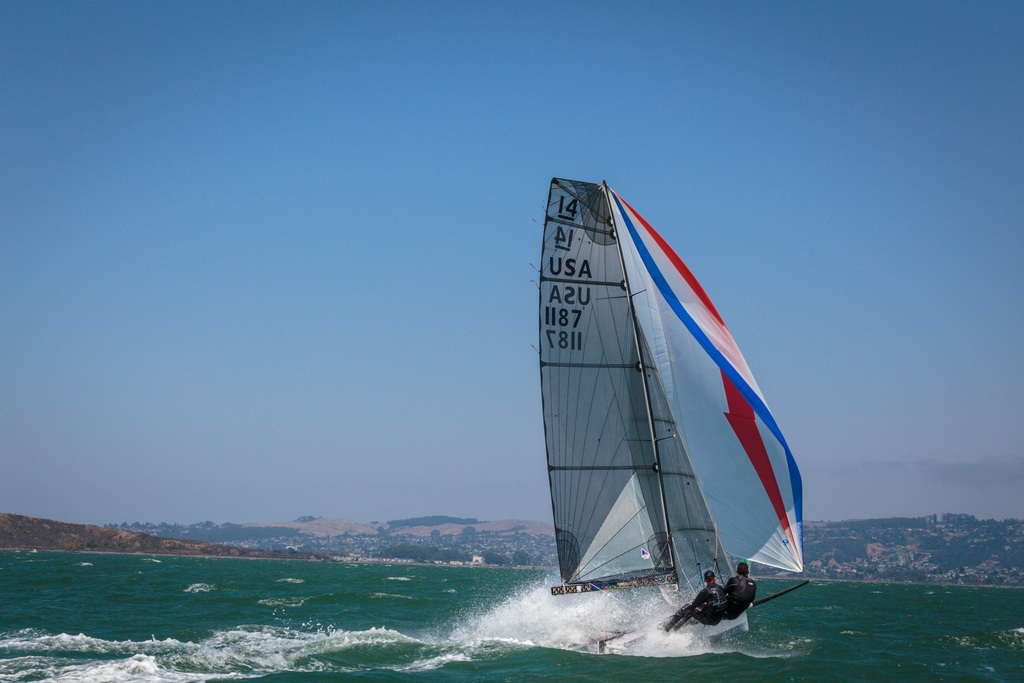 With the next year’s 14 World Championships being held in August 2018 at Richmond Yacht Club; the Club, Race Committee, Race Management, and Organizers were utilizing this NA regatta as a major warm up and test event.   That being said, you wouldn’t have known it as RYC ran a flawless regatta from start to finish with key attention to details.   All of the starts ran on time, the starting lines were square, the distances of the races were set well and monitored closely.   Mark changes were done tightly and by the book and they varied the angles of the reach marks throughout the event but all of them were challenging but fair.   Regatta Chair Tim Knowles and Principal Race Officer Del Olson did a tremendous job as did their many volunteers and the fleet was left impressed with how smooth everything ran.

Leading up to the event the weekend before there were quite a few fourteens out practicing.   The wind seemed to be a bit lighter for the practices with the core of the days ranging between 14-18 knots of breeze out on the race course.   That being said, launching out of RYC is always nice as the ‘Richmond Riviera’ is protected, usually sunny and launch conditions are almost always in less then 8 knots of breeze it seems.   The two practice days before the event showed quite a bit of activity at the club with the local NorCal teams there and people showing up from Seattle, Hawaii, Southern California and a few making the trip up from Australia.   We did have 2 Canadians sailing on US boats which was also good to see.   Those two practice days showed a solid half dozen boats on the water almost at all times.   Those days the breeze ranged from 12-18+ and showed a bit of bump on the race course due to the ebb tides. Race day 1 had scheduled 2 races the first day.   The first being a short race followed by the mandatory Distance race.    Instead of a large tour of the bay – the RC opted to send the teams on a large ‘Worlds style’ course with long legs and 4.5 laps including 2 triangles.    The first race started in about 16 knots of breeze – the course was a simple but long triangle with a full upwind finish.   Former World Champ Kris Bundy and Fritz Lanzinger won the start with Terry Gleeson sailing with Australian Ian ‘Footy’ Furlong also poked out but closer to the pin.    Bundy/Lanzinger had strong speed matched with tremendous height.   The lead changed multiple times with both Bundy/Lanzinger and Gleeson/Furlong setting early and not making the reach mark.   The rest of the fleet caught up to them while they had to take down, reach and reset and by the bottom mark there was a good pack of five boats rounding together.     Bundy/Lanzinger held on to their lead at the finish, followed by Gleeson/Furlong and Michael Radziejowski and Evan Sjostedt on B5 USA 1162.   The second and long race of the day was started in about 18 knots of breeze and during the race in increased to about 20 knots at the top of the course.   The long legs allowed for many to focus on speed and at the top mark there were a number of boats rounding in a tight heat together.   The first lap was a triangle and at the reach the tight gybe angle left a few of the lead boats tangled together and a number of them resulted in testing the water.   Sailing in the brand new and super flash Henderson B6 USA 1199 owned by John Clark – Australians David Alexander and 3 time World Champ crew, Dan Wilsdon, took advantage of the situation and legged out followed by Gleeson/Furlong.    Gleeson/Furlong sailed really hard in the wavy conditions, started legging out little by little over the long race and finished with a substantial lead by the end of the race for a 2-1 for the day.   Galvez/MacDonald were 3rd.   Alexander/Wilsdon finished with 8 points for the day as did the 2015 North American winning team Steve Goodson and Alan Diercks from Seattle.

That evening after sponsored beverages at the dock – 14 sailor and local Point Richmond resident John Clark, sponsored an epic pizza night at his waterfront home.   Beer was flowing as Chef Clark, Greg Mitchell, Jenn Virskus and others attended the pizza oven (no that was not an autoclave) and everyone helped turn out pizzas with miraculously no one getting burned!   The entire fleet, friends, and most of the race committee were in attendance and it was a great event at a beautiful home.   Thank you John! 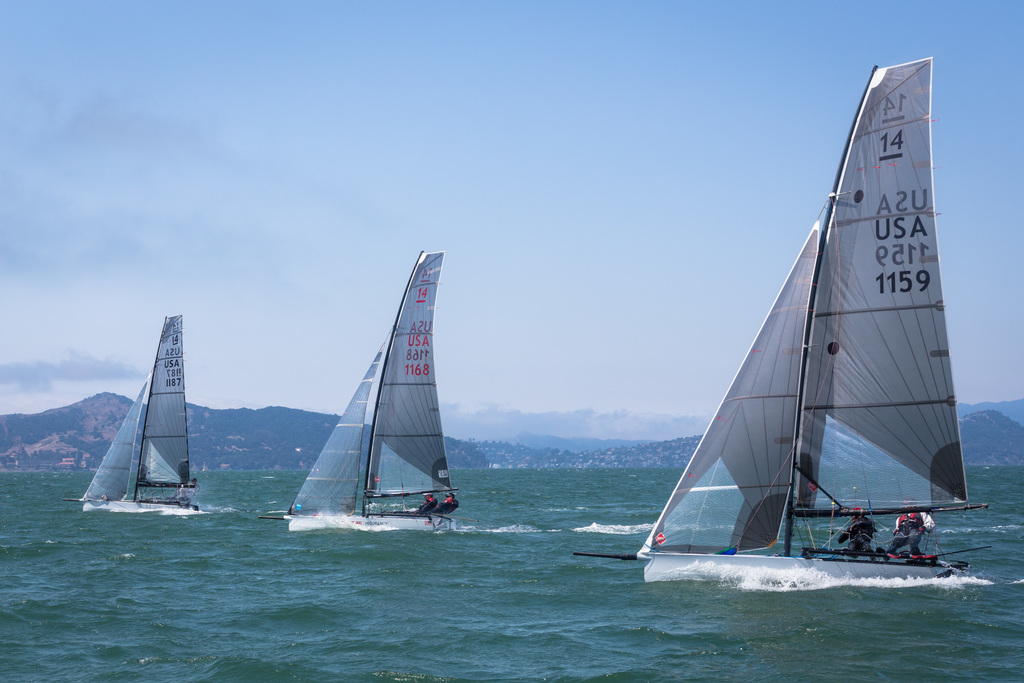 The second day was the most breeze that we saw the entire week.   The wind ranged from 17-21 knots with some gusts just touching 23 during the second race of the day at the top end of the course.   There was very little current with the tides being slack during racing with minimal variance.   Strong boat prep, aggressive starts, solid boat handling, and heavier teams all paid a strong dividend in the conditions.   Gleeson/Furlong who had not sailed together before the event put together an impressive day with triple pickets over the 3 races.   Alexander/Wilsdon had a tougher first race, but then put up two 2nds.    Galvez/MacDonald had a 2nd in the first race of day 2 and then posted a 4-5.   Bundy/Lanzinger and Goodson/Diercks both suffered some breakdowns towards the end of the day – while both Radziejowski/Sjostedt and Brad Reutenik & Jake Sorosky in the new B6 USA 1200 each managed one top 3 finish.

That evening there was a lot of camaraderie on the docks and in the boatyard with Galvez Insurance Company sponsoring a keg and just about everyone tending to a bit of boatwork before the club sponsored a great sit down meal for everyone in Richmond Yacht Club’s brand new club house which was built last year.    Great times, good wine, regatta photos running on the screen, and panoramic window views out on to San Francisco Bay made for a nice evening for everyone.

On Race Day 3 the forecast was for a bit lighter and then lightening more for the following week.   The day we saw the breeze range from 14-18 knots and the final three races were scheduled.   Goodson/Diercks, widely known as specialists in breeze came into form and clutched the first race.   Radziejowski/Sjostedt sailed a solid race and were 2nd with Dave A & Dan coming in 3rd.   Bundy and Lanzinger were in 4th while Gleeson/Furlong lost some form during the race and finished 5th after a quick recovery.    The second race turned into a long 3 lapper with two reach legs.   The breeze came up a bit and Gleeson/Furlong started stretching out after the first leg and half. Alexander/Wilsdon finished behind and the rest of the fleet was led in by Mikey and Evan on USA 1162.   With one race remaining – Gleeson/Furlong had won the event but there was too much fun sailing to still be had.   Galvez/MacDonald had great speed all week and really showed it off in the final races with many lead changes and working the left hand side of the course upwind followed closely behind by Goodson/Diecks.    Gleeson/Furlong finished the final race 3rd with Reutenik/Sjostedt 4th and Alexander/Wilsdon 5th.   Final results posted here:  http://www.regattanetwork.com/event/13898#_newsroom+results

Richmond Yacht Club put on a tremendous and well run event, both on and off the water.   If this is what we have to look forward to for Worlds next year we can say that everyone at this event is very enthusiastic about both the sailing and the proven capabilities for this club to run a great event. An excellent effort by all of the competitors and we saw many lead changes throughout the regatta.   Skiffs are always hard and this is a challenging race course, but never felt that it was too extreme.   Gleeson and Furlong sailed a very tight regatta especially with having only two days of practice together in total.   They focused on keeping the maneuvers simple while really sailing the boat hard throughout the event.   They worked the waves when able, not slowing down while just keeping on the right side of control.  Well done and the hard work put in certainly pays off!    Terry and Footy were able to walk away with the very large William Randolph Hearst Perpetual Trophy that dates back to the 1940’s.   That is a big one!

It is safe to say that the Australians will like this race course with the top 3 regatta finishers having a total of 4 Aussies between them.   The US boats are getting plenty of breeze on practice and will get more before our big event next year.   The race course is a big area with room for the RC to move the course if it gets lighter or heavier.   We would expect that at Worlds we will see conditions like this, but also see some lighter air days maxing at 14-16 knots as well.   The Worlds Organizing committee has been busy this last year+ putting the event together and from this regatta we can see that they will do a fantastic job.