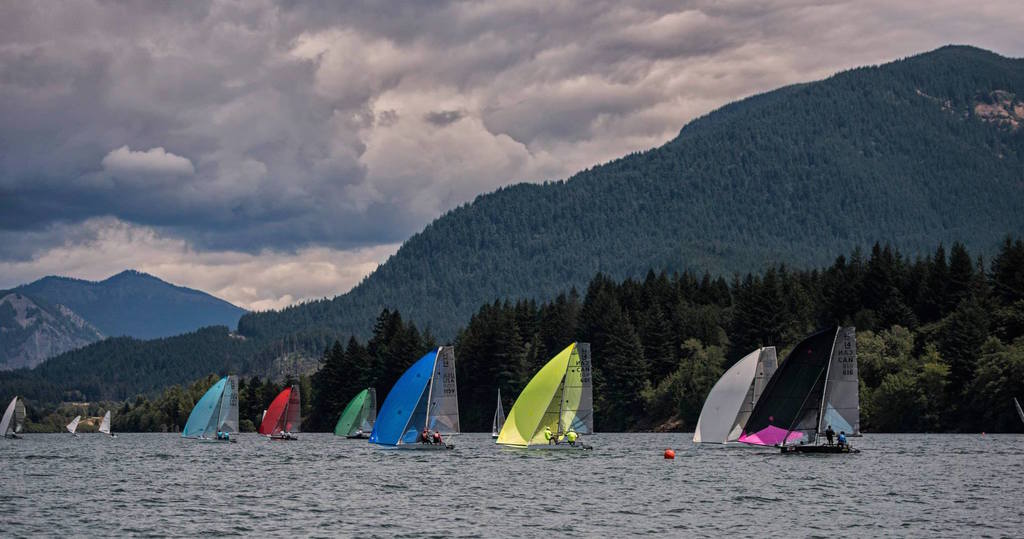 Twenty I-14s came into Cascade Locks, the heart of the Columbia River Gorge for the 2015 North American Championships, held July 24-26, including 9 boats from Canada, with most of those making the long trek from Toronto. Dave Alexander and Dan Wilsdon made the long flight up from Australia making good use of an idle B6 as well as Marcus Korobacz swinging in from Adelaide and sailing with SF local Mike Lazarro.

The Gorge did not disappoint with boats getting out all week practicing.   Blasting up the river hitting speeds in the low 20’s and getting tested by the Gorge shifts and blasts.   All week the breeze was pretty solid in the low 20’s with periods higher and lower. Henderson Boats added a new trophy to the mix with the Gorge Speed Challenge…  awarded to the average sustained top speed recorded over the 4 days of the event and that led to some beach chatter with people checking their times.   Full Sail, Sessions, some Olympia and Rainier were flowing heavy in the boat park with the fleet getting on well.   Apparently too much beer hit the slope and a wipe out took out early potential contender Brad Reutenik’s regatta with a broken rib.   Where’s a doctor when you need one?  Get well soon Brad!

Racing started up at noon on Friday and the breeze was cranked up to the peak of the week hitting the mid to high 20’s and puffs beyond with big shifts, some Gorge stingers and a few holes to keep everyone on their game.  However, as attractive as she can be the Gorge can also be a brutal mistress and on day one she let herself be known to a good portion of the fleet, especially new  comers.  She was full on before the first race and half of the fleet either broke down, were broken down, or hit their limits and made the smart move and headed in. 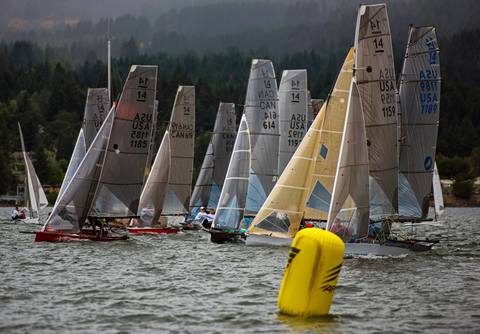 Seattle boats sail here the most often… and that was quickly shown with Steve Goodson & Alan Dierks posting a picket fence on day one.  Flat boat, flawless crew work and ran a clinic for those who could keep up to see them.   In 2nd from Seattle were Hendo in his latest B6 with his most famous crew, Martin Fabiansson, lead singer of the famed band ‘Hoist!’.   3rd on day one were Canadians Lauren Laventure & President du Monde Jason Lemieux with consistent sailing through the day.   Myself and Evan Sjostedt got through a tough day in fourth with Haywire & Birdman trying to port tack the fleet every start in fifth.  Really gents… did you try to port tack the fleet every race?  Commitment!

Lots of beer consumed in Camp Canada and elsewhere that night (I am told) and racing started an hour earlier on Saturday.   The day started lighter and the plan was for 2 races and a distance race 8 miles up the river and 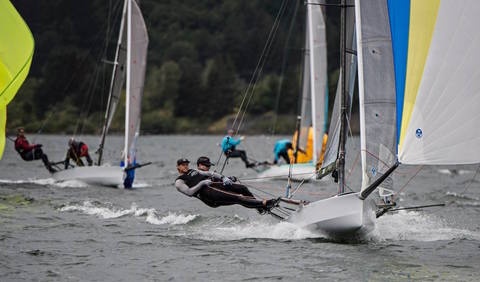 back.   Top Seattle boats maintained form posting a 2, 1 on the first race with Kris Henderson first on this one.

The second race the RC decided to send us on the distance race early.  Breeze was about 12-15 but quickly picked up as we started, rounded the top mark and started flyingdownwind (up river).  Tremendous scenery here… if you haven’t been to the Gorge, add it to that ‘sailing bucket list’ we all have… it is epic.   Fleet was splitting sides, trying to decide which was best.   We had a good lead for a bit until the puffs started hitting the other side.   About 2 miles up river the lead boats found the turning mark.   Uh, isn’t this about 6 miles short?...

(a bit of an RC misread we think but they were solid through out the rest so around we go)   A lot of tight roundings at the mark and forced errors sent some searching for sturgeon.   Our game fell off quick with a blown jib car which took us out 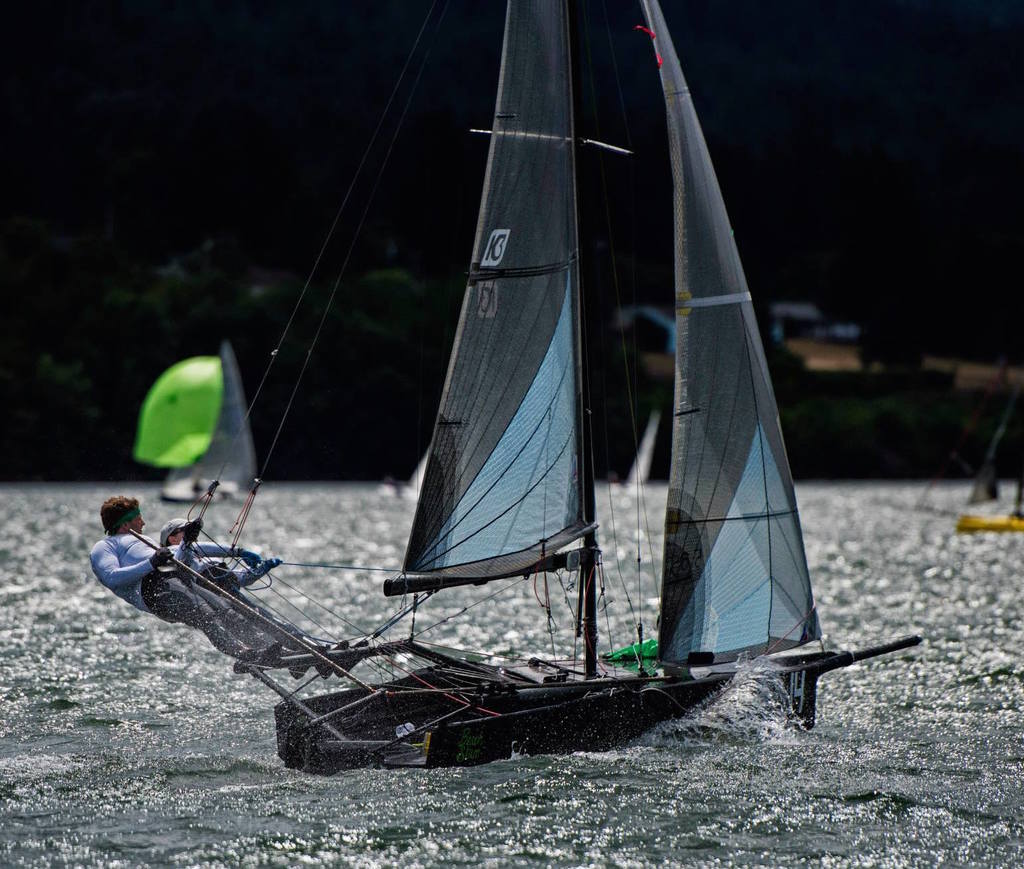 of contention.   Goodson & Dierks took their 5th bullet on this one, Dave A & Dan Wilsdon getting the loaner B6 sorted for 2nd, and Haywire for 3rd.

All went in for a long lunch and then a squallish Pacific NorthWest type big breeze canceled it out for the day.

Racing done early… oh, what will the fleet do now?

CGRA always puts on a nice event with a picnic style catered meal on Saturday night.   We shared the course with 5o5’s, some Weta’s, and a horde of modern laser type boats called Aeros who were also in attendance for the feast.   Add the pre-primed I-14 fleet with the party being strongly led by 9 Canadian teams staying in the adjoining camp, add lots of beer, a seeming never-ending cask of orange whips, a lovely Beaver inspired Piñata filled with airplane bottles of booze and let the games begin.  Who doesn’t want a whack at the beaver?   I’m pretty sure we will be invited back, I’m pretty sure the other fleets may ask to move their Gorge weekends away from ours, and I know we have inspired some converts.   Well done! 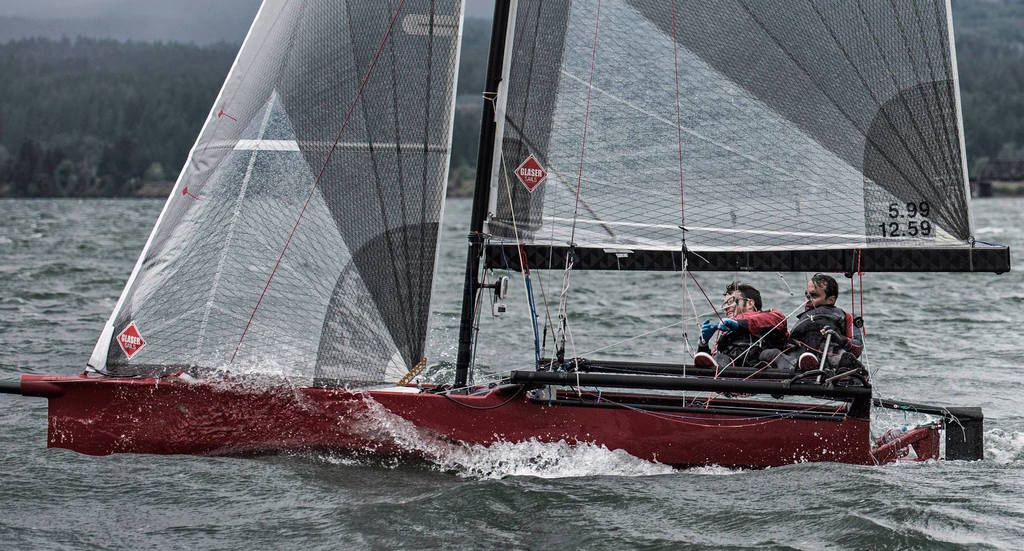 So with hangovers in full tilt, we started at 10:30am on Sunday.   Do they do this on purpose?    A bit misty but breeze was on, we got a race in and then the fans shut off with an abandoned race to the chagrin of launched Laventure & Lemieux…   and then a northerly filled in…   and finally back on to some good Gorge breeze.   At the end, we got 3 races in with super tight boat on boat racing in all parts of the fleet. Dave A and Dan Wilsdon showed their form winning the first 2 and then retiring for the day.  Seattle team (Mike Karas?) that jumped in the regatta last minute on Chris Rutz’ borrowed B5 found the magic first beat lift and never looked back to take the final race, well done fellas, looking good, lets see you again soon. 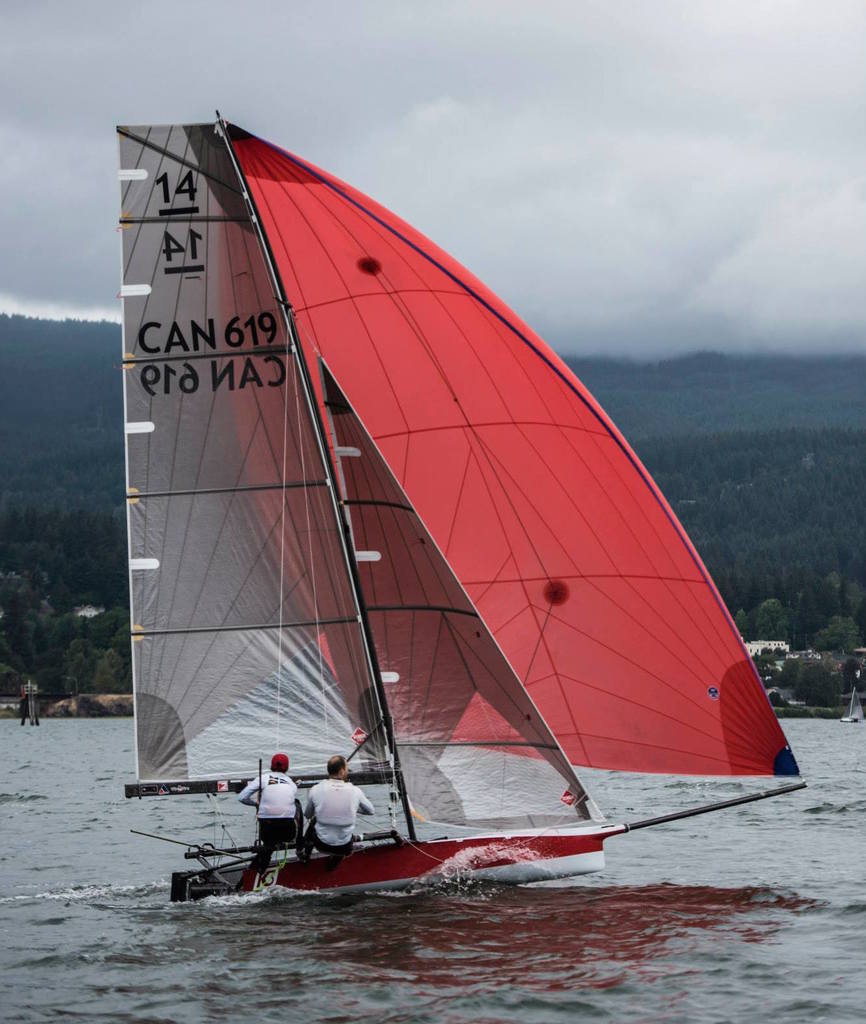 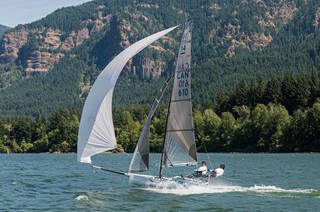 Goodson & Dierks showed they were human and posted an 11, 6, 5 for day 3 but still captured the North American Championship Title by 6 points. Kris Henderson and Hoist front man Martin got 2nd showing Seattle is tops here.  Myself and Evan Sjostedt had a fair day with a 2,5,2 for the bronze.    Lauren & Jason solidified 4th place being the top Canadian team and Lauren the top female 14er…  solid and looking faster all the time.   Haywire and Birdman 5th.   See full results:  http://www.regattanetwork.com/event/10352#_newsroom+results Seriously, a really fun regatta with lots of good sailing up and down the fleet.  Great to see a number of ladies in the fleet on helm and crew and fully competitive in breeze.   Every boat in the fleet had their moments, both good and bad, and everyone learned how challenging the Gorge can be, how big those shifts can be, and how critical that top boat handling is.   Keep coming back and you will do better!  The boats that sail here, do well here, and they do well in big breeze elsewhere.

Special thanks to CGRA, Dierk & Susan for putting on a great event and putting up with us.  We do enjoy it!   Photog Sean Trew for his work… love the photos Sean!  To the Canadian fleet and especially Jason Lemieux, Chris Leigh, and Ashley Warburton for getting your fleet organized and out to this event.  Great meeting all of you!   So important we get our fleets together often and this is one of the great venues to do it, thank you for making the effort. 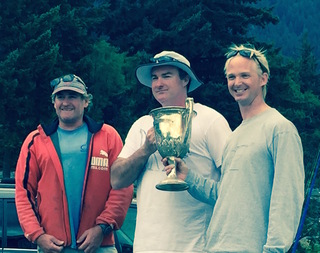 The Henderson Boat Company’s Gorge Speed Challenge ended up a tie.   Jamie Reid and Cam Puckey posting a sustained 19.8 on Friday on Cam’s boat… Myself and Evan Sjostedt with the same, both done on Hendo built B6’s.    Fun inaugural run and we’ll keep this one going at all 14 Gorge events. Lastly, hats off and huge congratulations to Steve Goodson & Alan Dierks on winning the 2015 International 14 North American Championships and the William Randolph Hearst Perpetual Trophy.   Well done and phenomenal sailing all around, you deserve it!

I14 US Class President