Hi everyone, I wanted to introduce myself. My name is Jimmy, I live on the south shore of long island. With my first I 14 just a day away from her new home I'm asking the community for some help. I have extensive sailing experience but have never sailed a 14 ever. I could really use some tips, tricks, and advice on getting started. besides the obvious, keep the smooth side down, and expect to swim.....alot, any advice would be very appreciated.

I am finally getting it together after that "d" thing. I need to get a mast, mainsail, and chute. I have a '97 Morrison, I think, and I want to get it put back together this winter so I can sail it next year. So, I am looking for somethink used...ideas? Offers?

email me, Marty Peterson at cabin16mp@att.net

My pipeline engineering conference provided the perfect cover for "just happening" to be in the area.  The hospitable, but gullible Seattle fleet took the bait.  Here is my daily report.

Saturday July 23 1145:  Arrive hotel downtown seattle.1330: my fellow committee member, a Seattle resident with white arms and legs sticking out of shorts and hawaiian shirt, is muttering about being stuck in a meeting on the first real day of summer.

Video and photos for the 2010 Pacific Rim Championship

Sailgroove.com has an excellent collection of videos from each day as well as a number of great photos:

Results from the 2010 Pacific Rim Championships

By Chris Love / Sailgroove.org. The International 14 Fleet blasts downwind at the sixth running of the Pacific Rim I14 Championships in Kaneohe, HI on Day 1. 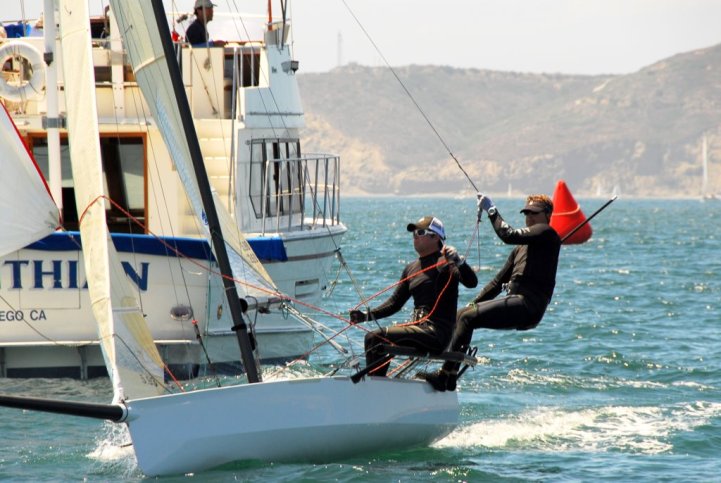 The I-14 Nats went down in San Diego, Friday through Sunday, Aug 20-22, and did not disappoint. Ronstan, Sailing Supply, Glaser Sails and North Sails all contributed with San
Diego Yacht Club putting on a first rate event both on and off the…

Rumor has it that during the Nationals SDYC will be serving Stone IPA on tap. If that doesn't get you there, I don't know what event organizers can do to lure you in. For those of you who want an alternative, Brad tells me that they are also serving Arrogant Bastard Ale. Brad- how do you know that?

Sorry to take so long for the write-up-we just got back from the Cassidy's Bay regatta...So it was a lot of fun-we ended up with 10 boats, hailing from Toronto, Ottowa, Newport, and Hayling Island, England. Tracy and I split the regatta with Doug and Louise Walker from England. Friday was the distance race which was held in a light southerly and rainy conditions-not ideal or epic in any way, but sailable. Doug and Louise sailed this as we wanted to give them the chance to… Continue

I see this site is advertised ass a place to talk about sailing and beer. It looks like a great site. Thank you Guillo. But where is the beer talk? Brad- are the Nationals going to be sponsored by Stone Brewery? Is there a bus rented for a field trip and dinner there for one of the nights?

For discussion- is there an IPA that is any better than Stone IPA?

The black boat with Massey on helm and Wilsdon fo'ard dominated the i14s by taking out both the World and Australian Championship. Pic: Christophe Favreau

LONG BEACH, Calif.---Howard Hamlin and Euan McNicol can sleep in late Saturday because the only item on their schedule is the awards dinner on the Queen Mary Saturday night. The Long Beach skipper and his Australian crew don't plan to sail the seventh and last race after locking up the International 14 Class World Championship Friday.