In what year did you start sailing?
1964 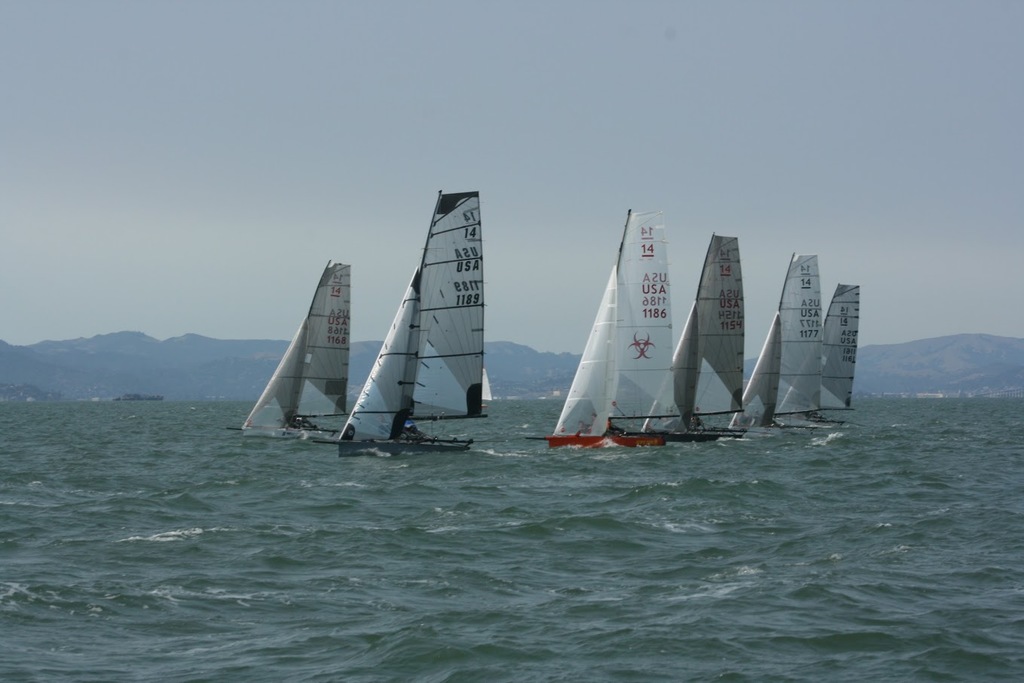 The 2013 West Coast Championship was held March 15-17 in conjunction with the San Diego NOOD regatta.  The fleet sailed out of Navy Yacht Club, which is only 10 minutes from the starting area in the broad, smooth, un-trafficked waters of South San Diego Bay.

Thursday March 14: Many boats arrived this day to get set up, practice, and/or get measured by US Class Measurer Warren McArthur.  It was good to see Warren back with the fleet after he was rear-ended last year on his way to the…

Only 3 boats showed up for this; Brad and Trick on the B5 1161, Steve and Gerrit on the Shu2 1183 and Terry and Brian on the B6 1187. Forecast was for 5-7 kts out of the ssw, veering more west in the afternoon. As is often the case in San Diego, the summer winds were more than forecast. Most of the day was sailed in 8 to 12 kts, with some lighter stuff thrown in occasionally. With the ssw wind direction, we sailed in the main channel near the harbor entrance off of the Navy's submarine…

Hi Steve. US 1027 is actually 1166 - the number wasn't allocated until 2005 when the previous owner bought it. The story is - it is an Ames II design, but was built by Dave Ovington in 1989 as a plug for 6 glass boats to be built in Annapolis. The left-over plug was acquired by Bill Moss, who proceeded to fit out the interior, but never got around to finishing it. Rule changes around that time may have influenced him, so it sat as a 'living room' ornament until purchased by Jamie Leopold in Vermont, from whom I purchased it last year - after spending 2 years trying to figure a way to ship it from Vermont to Seattle...! Eventually my friend picked it up on his way back from DC. It was featured as a video on You-tube under 'Classic International 14 1985', and I spotted it on the Classic I-14 blog written by Rod Mincher.

I acquired with it a mixture of masts and sails obviously old stock from Bill Moss (hence the 1027 sail no.) It is in pretty good condition, but the finish is pretty scrappy, esp. where the epoxy was laid down on the decks/tanks. However, determined to at least try it out last summer, I jury-rigged it and took it out on our local lake, but there wasn't much wind to get a proper impression. Since then it has been in the shop being modified to suit my needs. Basically I bought it as a 'blank canvas', a lightweight fast hull, and have bought some 420 sails for it, cut down one of the masts, and will maybe fit an assymetric once I get the feel for it.  Then I can also use the full rig if i feel like it, but with only one trap.

The hull is cold-moulded below chine, bent plywood above chine. It is possibly the last wooden 14 to be built, and will be treasured by me.

I also have another 14 (the red one) which may be worked on later this year - its from the 60's and came with sail no 800, which was Stuart Walker's boat, but it isn't his. Needs a lot of work, but does have all the gear!

Thanks for your interest. Do you know about the Classic Racing and Vintage Dinghy Association in the UK (CRVDA) - they have lots of good stuff about restorations, and naturally as the 14 is probably the most highly respected class that has had such an influence on dinghy sailing over the years, there are quite a few keen old-timers. they have a Facebbok page - one good way to see what they're up to.

Can you please pm me: fcaccavojr AT gmail dot com

Thanks Stephen.  I hope to find an inexpensive, early generation Bieker for my son and I to learn with.

thanks for the note! It's been a few years since I sailed a 14 and I love seeing the advances in the design and rigging.  It looks like you have a fine project going on.

Thanks Steve,  good to meet you in Hawaii.  Looking forward to progress reports on the new build.

Stephen, I don't know anyone bringing a boat East.  Why don't we both ask around (I will be in Annapolis in a few weeks)?  There is no rush, it's the end of our regular sailing season here.  Can you call me at 443-614-0120 and we can work out the details?  Thanks, Mike Baird

Yeah, I'm looking for more horsepower.  Like you would add a blown V8 to a 40's Ford.  The mast location on this Dutch boat is very far aft, so I think the fit could be made.  And this boat carries a full chine, so the aft surfaces are extremely flat. It's far more stable than a Thistle and much less tender.  It's got a trapeze as part of the original rigging, but we have yet to use.  The jib would be cool, also.

Because there is no Schakel class left, and mine is the only Schakel in the US, I don't have to abide by class rules:  Thus, I am customizing the boat to my standards and not class standards.  After a few years in a dinghy or two, I have some ideas that I've been trying out.  I think a modern mast and main/jib is in order.  My theory with this boat from day one has been:  Take everything too far, fail, then bring it back a notch.  Mike

Stephen, I am interested in the CST carbon fiber mast you have for sale.  Is it still for sale?  I have restored a 1967 Schakel dinghy built in Holland.  It was probably modeled after 14's of that era. It's all mahogany and visciously fast.  I have added NACA 0012 foils replacing the rudder and daggerboard, with the notion of hot-rodding the boat.

Now I see your carbon fiber mast for sale.  It should be a good fit for this project. The boat currently has an old Proctor-style aluminum mast that weighs over 30 pounds.  I can barely raise it.  I'm looking for a lighter spar and mainsail.  Let me know what you think and if the mast is still for sale,  Mike